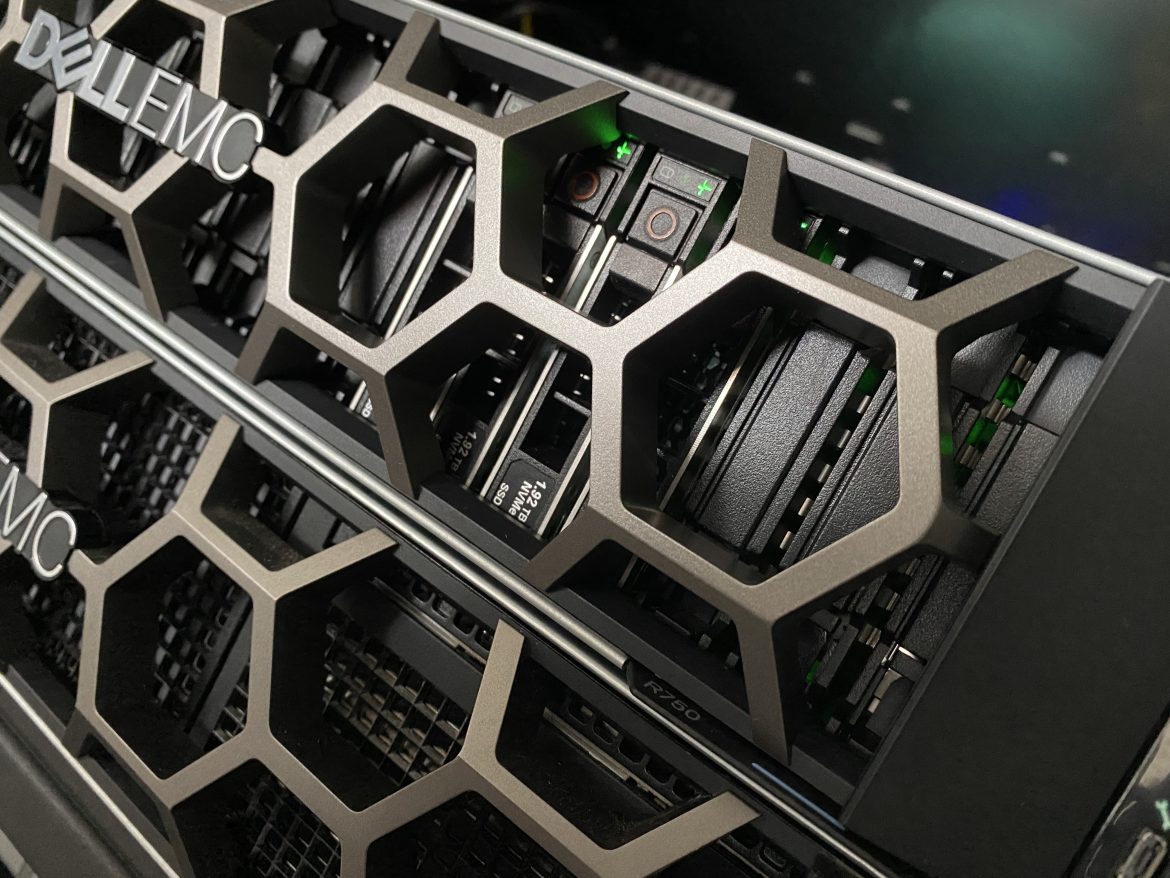 I have gotten my hands on a DellEMC PowerEdge R750. I have been grateful to collaborate with Express Computer Systems to get access to try out and create an awesome review of this hardware. This enterprise rack mount server is a powerful workhorse being powered by the 3rd Generation Intel Xeon Scalable Processors, is a dual socket/2U rack mount server. Of course, I have racked and installed it in my Home Lab 😊. During the initial unboxing, I was amazed on how this server is built from DellEMC, I mean all DellEMC Servers are built to be tough and reliable and a cool feature to see within Dell line up of servers is Water Cooling!! Yes, the DellEMC PowerEdge R750 support an optional Direct Liquid Cooling for keeping up with the increasing power and thermal workloads.

Now, lets get into the deep dive of the DellEMC PowerEdge R750!

When I first opened the top cover of the chassis, I was amazed. The modular architecture that DellEMC is implementing into their new 15th Generation Servers. PCIe Risers are now much more modular than before, the tool less design – allows the riser card to be removed and install your choice of PCIe card and install it back into the server without any tools.

Now, we will start breaking down the review and we will get into all aspects of the server.

The Processors installed within the DellEMC PowerEdge R750XD, consist of 2 Intel® Xeon® Gold 6342 Processor (36M Cache- 2.80 GHz). These CPUs are very efficient power consumption for the core/watt ratio. We will get in more depth on the Power Usage in the Power / Efficiency section of the blog. Below are the Specifications from Intel’s Website, there are more features these CPUs offer, if interested check Intel’s website – here.

The memory, that is installed is SK Hynix 128GB DDR4 PC4-3200AA DIMM, total of 8 DIMMS. I have attached below a table of the memory specifications.

The server has 4 Dell 2.5” U.3 1.92TB PCIe Gen4 NVMe SSD. These NVMe PCIe disks have shown outstanding performance runs. I have compiled some benchmark tests with Crystal Disk Mark, below are few pictures I have taken of the Disks. The Controller that is backing these NVMe U.3 Gen4 SSDs are two PERC H755N Front NVMe.

The speeds that are shown below are tested on a virtual machine on VMware ESXi 7.03f with specifications 6vCPUs, 16GB Memory, 90GB VMDK Disk.

I was shocked, when I saw these results of a single server being able to offer these kind of speeds. I cant imagine having a RDMA setup with a vSAN Cluster with 4 of these Dell PowerEdge R750 servers. RDMA = Remote Direct Memory Access

There are few configurations of the DellEMC PowerEdge R750 Series –

I was shocked on the power consumption, at peak I have seen 503 watts consumed, where at idle workloads the server sits around 360-390 watts with two beefy Intel Xeon Scalable CPUs and 1TB of Memory and 4 NVMe SSDs.

Below is the current power reading as the server is operational and there is workload running on it.

I have pulled a snippet of the Historical Trends from iDRAC. As you can see the power usage for the performance per watt is a great ROI on any investment where datacenters need consolidated designs where power and space are limitations.

This DellEMC PowerEdge R750 that I have up and running has two 1400watt power supplies. I have both of these connected n two seperate PDUs with Eaton UPS Systems.

I have pulled Temperature statistics, as of writing this review. The CPUs are staying very cool, which the new “T” shape cooler design spreads the heat out evenly and which allows the CPUs to cool down quicker than the older traditional tower heat sinks where the heat had to rise up through the copper pipes.

Disclaimer! Mixing of STD, HPR SLVR, or HPR GOLD fan is not supported.

In the front, the Dell PowerEdge R750 offers:

In the rear, the Dell PowerEdge R750 offers:

The Riser topology that DellEMC has started using within the Dell Line up of 15Generation servers is really neat, I like how easy and quick it is to take out a PCIe riser. No Tools are needed! Within minutes I was able to take apart the server and have all the risers out, there is two cables that are connected to Riser 1 which is the Dell Boss NVMe/SSD card which is labeled “0,1” once you disconnect those two cables it’s a breeze!

Dell BOSS S2 module – They are now hot swappable! Before when you needed to swap out a boss card, you had to migrate off your workloads, and shut down the server and pull the top cover, then pull out the PCIe Dell Boss card from the riser and unscrew the NVMe / SATA SSD from it. Which that would impact workloads to business continuity. Now, with Dell 15th Gen Dell PowerEdge R750. You can HOT SWAP! This will improve efficiency of replacing failed boot disk and bringing workloads back up in matter of minutes rather than hours!

References to Websites – in direct links in each section with any content from DellEMC / VMware etc.

This website uses cookies to improve your experience. We'll assume you're ok with this, but you can opt-out if you wish. Accept Read More